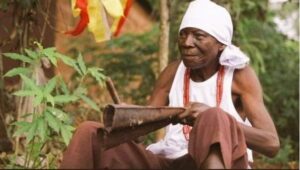 Rainmakers (Ọgha mmiri), are the masters of the arts of “rain preventing” and “rain calling”, has been revered as important figures in the South East. This practice is dated back to many years.

these supernatural men are known in some dialects as “Ọgha mmiri”, “Ọchụ mmiri”, are sought out by celebrants and communities alike to forecast any weather that might prove disastrous to upcoming occasions, as a precautionary measure. In the same vein…a client could hire a rainmaker to cause disruptive, torrential rains on another person’s function.
For example, one could still remember at a time, during Governor Sam Mbakwe’s tenure, when the then President, Alhaji Shehu Shagari, visited Imo State, this enactment played out.As the visit occurred in the rainy season and the president landed in the midst of torrential rain, the governor, wanting an icing to the elaborate celebration of welcoming his visitor, called in veteran rainmakers from the state who after some mystical activities, commanded…the sun that enveloped the venue while other parts of the state continued to soak in the downpour.

This feat was a well discussed issue in the various media platforms, at that time was celebrated as a high profile enactment that was peculiar to the Imo and Ndị Igbo in general.If rains were to be predicted and stopped from falling, the rainmakers would perform various rituals to spiritual forces that would dispel such weather. For a rainmaker to successfully carried out his duty, these estimated nature of items must be made available to him…two cartons of beer, two bottles of gin, five liters of kerosene, heaps of firewood, a live cock, roasted meat and some amount of cash.

On the eve of the occasion, the rainmaker pitch his tent very close to the venue and the listed items are to be assembled for use on that spot.A bonfire would be made and smoke keeps spiraling into the sky continuously. At a point when the sky becomes dark and rain threatens to fall, he would ensure that more smoke went up the sky & dispersed the ominous clouds. It will continue like that and when it appears the heavencould no longer withstand the unwarranted intrusion, the skies brightens reluctantly and a scorching sun would enveloped the venue. With this turn of event, the rainmaker will smile in victory and the people around nod their heads in approval and then believes in the ‘powers’…of the rainmaker.

In Ekwulummili, Anambra state, rainmakers use a special stone called “Mkpume ọnụ” to make rain. In Nsukka, some rainmakers claimed to have inherited the act of rainmaking from their ancestors.
Rainmaking is not natural, it’s man-made.