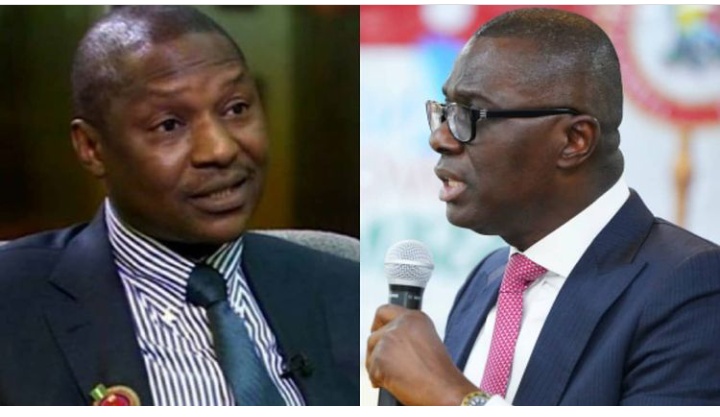 The Attorney General of the Federation, Abubakar Malami (SAN), on Wednesday, confirmed that policemen dispatched to Magodo Phase 2 Estate area of Lagos State were there on his orders.

This was contained in a statement by Malami’s Special Assistant on Media and Public Relations, Umar Gwandu.

“The role of the executive is, in this respect, simply to aide the maintenance of law and order in due compliance with rule of law arising from giving effect to the judgment of the apex court of the land.

“Let it be known that the issue is regarding a Supreme Court Judgement that was delivered in 2012 long before the coming of President Muhammadu Buhari’s administration in office at a time when Malami was not a Minister.

“The judgment was a reaffirmation of the judgments of Court of Appeal and High Court delivered on 31st December, 1993.”

“It is widely reported in the papers that the Lagos state Governor was quoted to have said “I’ve spoken extensively with the Inspector-General of Police and the Honourable Attorney-General, and we’ve resolved all the issues”.

“The Office of the Attorney General of the Federation and Minister of Justice, would appreciate if the coalition of the Governors will help to unravel the circumstances preventing the Lagos State Government from enforcing the court order despite several attempts from 2012- 2015 and so-called settlement initiative started in 2016.

“We want to restate that the sanctity of the rule of law is not a matter of choice,” the statement added.